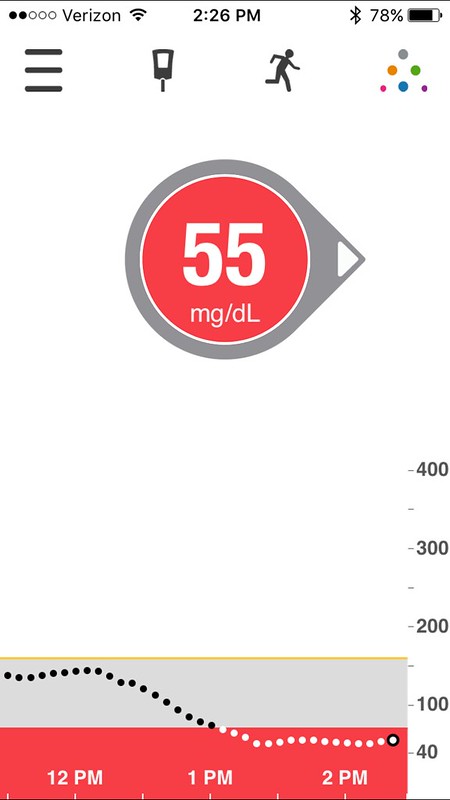 “Normally, I can roll with the punches. But today diabetes caused me to miss a conference call because I was sitting in a parking lot for a full hour waiting for my blood sugar to come up. Dizziness and the unwelcome low-crying jags dominated while I tried to entertain my son as he sat in the car wondering why we weren’t going anywhere and why mom kept saying, “It’s okay, it’s okay” somewhat to him but mostly to herself. Diabetes can GTFO today.”  @sixuntilme

A week or two ago, my endo suggested I move my active insulin time from 3 hours to 2 hours to help with some stubborn highs.  I forgot to implement his change for a few days, but remembered last week to update my pump.

“You might notice that you’re going low.  If that happens, change it back to 3 hours.  Just be careful,” he said.

I promised to pay close attention.  I meant to.

But the lows hit hard and fast and my brain immediately went empty.  It took me three full days of severe hypoglycemic episodes before I realized that I was low constantly.  Honestly, it was the brain fog of all those lows that kept me from changing my active insulin time back.  It wasn’t until a friend suggested I look at that number that my low-addled brain let some logic leak through; “Hey … Kerri.  Stop being low for five seconds and update that active insulin time.  Do it right now.  Or else you’ll consume your own weight in raisins and juice boxes.”

Changing that number (from 2 hours back to 3 hours, but I ultimately ended up going to 3.5 hours because the lows were persistent) helped so much, but experiencing so many back-to-back extended low blood sugars knocked me for a total loop that took several days to recover.  I’m older and more worn out than I was a few years ago (thank you, natural aging process and also hey there, new little baby person), making the hangover from hypoglycemia more pronounced these days.  So much so that I wasn’t good at processing normal thoughts, like, “Hey, when did the baby last eat?” and “Hmmm, what was I going to write in this open email draft?”

But after a solid day without a low blood sugar, my brain reclaimed “active” status.  And I’m no longer leaving post it notes stuck to the cupboard that say, “Pants:  Put some on.”  Clearly my brain is not any good without proper sugar content on board.

I have a new respect for low blood sugars and their ability to sneak up on me and tie my mental shoelaces together.

Time is of the Essence.