T1International founder Elizabeth Rowley guest posted before the #insulin4life rally in Indianapolis, and today her colleague Karyn Wofford is taking over SUM to share more about the protest itself, their goals, and how the diabetes community can continue to help.

For nearly 18 years, I’ve had type one diabetes. I’ve been on “life support” via insulin over half of my life. I heard another person with type 1 diabetes refer to it as life support, and that really struck me. When we think of that term, we envision an ill person with breathing tubes, heart monitors and a medical team surrounding them. Diabetics truly are on life support, but it’s invisible to those around us and comes from a small glass vial or plastic pen.

When in my teens, I woke up every day and took what I saw as mere “medicine” to treat my disease. It wasn’t until I grew older and had legitimate fear of not being able to afford insulin, that I no longer thought of it as medicine. I know now it is life.

Speaking out at the #Insulin4all Demonstration

On September 9, I gathered with people with type 1 diabetes, parents, and others who had been directly impacted by diabetes to speak out in front of Eli Lilly Headquarters in Indianapolis. We spoke out against outrageous insulin prices that are likely a result of price gouging and collusion among the “big three” insulin manufacturers. Prices have been jumping in leaps and bounds over the past 20 years, and now have reached a point where patients are paying more than their mortgage to foot the monthly bill. Lives have been lost so these companies can pull in sickeningly high profits. 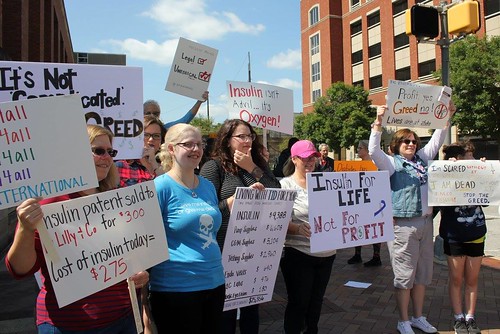 T1International served as the primary organizer of the event, while People of Faith for Access to Medicines (PFAM) was a huge contributor whose representatives went above and beyond to make everything happen without a hitch.

Just a few years ago, I started becoming much more vocal about having type 1 diabetes. I’d finally realized that there was so much I could do to raise awareness and educate people about the kind of diabetes I have, type one. Awareness is an invaluable tool in our fight for affordable insulin, because there is great misconception that type ones can just stop eating sugar to “treat” or “fix” our diabetes. Of course, this is untrue. No one’s body can survive without insulin, and people with type 1 diabetes cannot produce insulin, so the medicine in essential to us. Insulin = life. I was able to voice this at the demonstration, along with my personal struggles.

At the demonstration, I was moved hearing the stories of Mike Hoskins and Angela Lautner, who also have type one diabetes. Instantly, I felt a connection with them, and an overwhelming sense of community amongst all those who attended. The energy in the crowd was contagious; people who’d only met moments before were lending shoulders to cry on and unifying as a force. I think we all realized something really special had been ignited, and we are eager to keep pushing forward.

Clever chants and signs were aimed at the enormous central Eli Lilly building across the street. One protestor toted a Frederick Banting doll, while others wore shirts with phrases such as “give me insulin or give me death”. Everyone was loud, powerful and to the point, with no fuss or crazy antics. We didn’t want to cause anger, we wanted to provoke thought. A powerful message executed with passion and constructiveness was the core of the rally.

I heard many stories, like the one of a grandmother caring for her preschool-aged, type one grandson. Her life is consumed fighting for his rights and ensuring he has a future. Another mother was there with one of her three diabetic children. I struggle with the costs of only myself; I can’t imaging paying three times that amount.

Local Indianapolis news cameras and reporters were amongst the group, and our cries to Eli Lilly were amplified. A response was released from Eli Lilly later that night:

“We are pleased that people in the diabetes community are engaged in this issue and demonstrations are one way to do so. It will take continued effort across the healthcare system to affect real change and Lilly is committed to working with others to make it happen. This topic sparks a passionate response from people who are affected and we are committed to finding solutions. Lilly has been an active participant in the insulin access dialogue for a long time, and that work will continue. In the last year, we have introduced a number of initiatives to help reduce the amount people pay at the pharmacy until broader changes occur.”

It is encouraging that we caught their attention and received a response, but people with diabetes know that current programs are only short-term fixes, or “bandaids”, as noted by an Eli Lilly Representative. On the day, we asked for three things, and we continue to ask Eli Lilly and the other insulin manufacturers to address them.

We are hopeful we can achieve this, especially as we ensure that the nation understands what exactly it means to have type one diabetes, or to be insulin dependent. We hope that our next stops will include New Jersey based insulin companies Novo Nordisk and Sanofi, as they are as much to blame as Eli Lilly.

A fire is burning in the hearts of those impacted by insulin prices, and with six million Americans depending on insulin to survive, this movement is anticipated to become an uprising people can longer look away from. The Eli Lilly #insulin4all demonstration has moved the online initiatives to in-person confrontation that cannot be ignored. If more and more people take a stand, we can make lower insulin prices a reality.

Karyn Wofford is a writer, type 1 diabetic and advocate. She’s had diabetes for nearly 18 years and now serves as an advocate for T1International. Her goal is to raise awareness about her disease, while providing support for fellow people with diabetes through her writing.