Stories about moms with type 1 diabetes having babies warm my heart completely, mostly because they remind me of my kids’ birthdays but also because pregnancy and diabetes is hard work and deserves an extra WHOO HOOOO! at the end.  Today, fellow writer and T1D mama Ginger Vieira is borrowing SixUntilMe to share the story of the birth of her second child. Take it away, Ginger!

“This time it will be simple.”

That’s what my husband and I had said to each other several times as the due date of our 2nd child was just a few weeks away. It’s not as if the birth of our 1st child, Lucy, was remarkably complicated–I felt pretty great during the last month of that pregnancy and had no swelling or other complications–but I did spend 4 days in the hospital prior to her actually evacuating the ol’ womb because our attempt at an induction totally failed. (Basically, my body was like, “Whatever. I really don’t feel like going into labor…deal with it.”)

This time was very different.

At 35 weeks, I started gaining 1 to 1.5 pounds of fluid per day. Swelling up like a water balloon just between my knees to the tip of my toes. But my blood pressure continued to stay well within the range of normal and even below 120/80 bpm, so the doctors continued to insist that I’d have a cesarean at 39 weeks and no sooner. My A1C was at 5.8 percent, and everything they could measure in a blood-draw came back fine, too.

And baby girl looked consistently healthy and comfortable. In fact, throughout the entire pregnancy, she and I had both been doing great except for super-crazy vomit-inducing over-production of stomach acid which I’d been treating since 3 months pregnant with as much antacid as my body was allowed. Otherwise, until this last month, the pregnancy had been anything but traditionally tedious and tiring.

By 36 weeks my energy was shifting dramatically between feeling like I could make it through the day and then suddenly feeling as though all I could do was lie on the floor like a pancake, trying not to cry (or sometimes crying) while also needing to chase and entertain my toddler.

By 37 weeks, I had gained nearly 15 pounds of pure fluid all within the prior 2 weeks. Everyone, including the nurses at my appointments, gasped in horror when they saw my feet. My swelling wasn’t a concern because it wasn’t in my face or hands and my blood sugar was still very normal. Personally, I think I would’ve been in severe pre-eclampsia had they made me wait another week. Meanwhile, walking through the grocery store wasn’t just uncomfortable–it was excruciatingly painful and my feet would be twice the size by the time I got back in my car.

Despite my lack of diagnosable symptoms, I felt very strongly that something was wrong. I can’t tell you what it was exactly, but like anyone with one or several chronic illness understands, there are things you can feel and know about your body when you’ve had to micromanage something as complicated as type 1 diabetes and fibromyalgia for several decades.

I felt like my body had met its personal limit of physical stress, and it was breaking down. The idea of trying to make it to 39 weeks had me bursting into tears when my husband came home from work after trying to hold them back throughout the day. You can call me a wimp and say it’s all just 3rd-trimester normal pregnancy exhaustion, but my body was struggling in ways no one could seem to measure.

I finally emailed Dr. Jones (who is now someone I might as well consider my hero!) and asked him if he and the OBGYN team would please consider a c-section at 38 weeks.

Fortunately, Dr. Jones strongly believes in “individualized care.” He was able to convince 3 out of the 6 members of this OBGYN high-risk team to support an early c-section at 38 weeks but only if baby’s lungs proved to be fully developed through an amniocentesis.

The other 3 doctors were firmly against an early c-section because on paper, I was still healthy. One doctor did acknowledge to me that I could’ve very well been in the early stages of pre-eclampsia, but again, my blood pressure was normal so it didn’t matter yet.

At 38 weeks, we arrived for the amniocentesis, nervous but hopeful. The procedure was extremely fast and simple. Dr. Jones inserted a very thin needle into my belly while watching its direction on an ultrasound screen and pulled out a small amount of fluid from my uterus. This fluid is then tested for something (honestly, I can’t remember right now) that indicates the maturity of the baby’s lungs.

My husband and I were both relieved–he saw firsthand the days where I could barely function in those prior 2 weeks.

Within 3 hours we were in the operating room being prepped for a c-section. And this part was a much better experience than my first c-section. By the time they did the c-section with Lucy, I had been on an IV drip of pitocin for nearly 4 days, extremely sleep-deprived, and having only eaten 1 real meal (because they prefer you don’t eat while you’re being induced). During Lucy’s birth I was very pale and weak, my teeth were chattering violently as a side-effect of the epidural, and I was a tired, occasionally incoherent mess during the few hours after she was born. However, not eating for 4 days did make it incredibly easy to keep my blood sugar at 90 mg/dL that week, which meant Lucy’s blood sugar after birth was perfect. 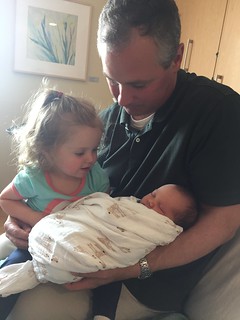 This time, during this c-section, my face was full of its normally rosey color, and I didn’t experience any uncomfortable side-effects from the epidural. I was lucid and bright-eyed and very ready. My blood sugars had been extremely steady in “non-diabetic range” all week with an extra dose of obsession that comes with the final weeks of pregnancy. The only blip was that about an hour before we went into for the c-section, I was worried my blood sugar was dropping so I drank about 2 oz of apple juice which unfortunately had my blood sugar up around 140 mg/dL during the actual c-section.

Everyone on our team was great: the nurses, the doctors, the extremely friendly anesthesiologist named Gabe (Dr. Gabe) who chatted with me throughout the entire operation, answered my random questions and laughed at my jokes while my husband held my hand and watched them carefully cut me open to bring this little creature out into the world.

And then she was born.

We had been telling Lucy about this baby–Baby Violet– for weeks prior to her arrival but, like Lucy, we actually didn’t know anything about her besides her name.

And here she is.

Meeting your 2nd child is different than meeting the first, at least it was for me. I felt so much calmer and certain. I knew how overwhelming the moment would be having met a life I’d been growing inside my own body before that it almost felt like a normal daily experience: Here, this is the baby you’ve been loving for the past 9 months that you’ve never seen before and that you actually know nothing about. 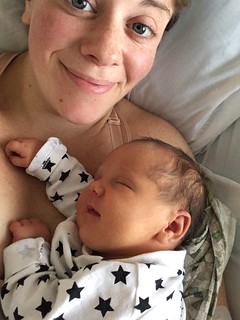 Due to that unfortunate 140 mg/dL right before the c-section, her blood sugar was actually very low, around 27 mg/dL within the hour after her birth. Fortunately it came up quickly after one nursing session because my body might be lousy at producing insulin but it rocks at producing colostrum and breastmilk. So she was fine. Everything about her, in fact, was fine.

We spent the next 5 days snuggling and cooing and nursing. She slept about 23.5 hours a day. Her big sister thought she was adorable (and surprisingly still does, more than 2 months later). My long-acting insulin dose was down to 4 or 5 units a day (my non-pregnant dose is 11 units), and my blood sugars were mostly very manageable because I was taking so little insulin.

Speaking of insulin, I’m very grateful that Dr. Jones put a note in my chart that instructed the nurses and doctors to let me decide all of my own insulin doses postpartum. This special note was the result of telling him that during my postpartum experience with Lucy, I had to sneak insulin injections in the bathroom because the doctors wouldn’t give me enough insulin! Everyone followed Dr. Jones’ note effortlessly and this made our hospital stay particularly less stressful and far more enjoyable than our stay after Lucy was born.

(I should also add that the nurse, Barbara, who was with us almost every day, was amazing and so supportive.)

There was one day where I really over-did it with physical activity walking around the hospital trying to “pass gas” so I could given permission to go home and entertaining Lucy when she came to visit us, that by that evening I could barely move I was in so much pain. (I’d also had a severe allergic reaction to the chemicals in the hospital bedsheets and scratched myself so severely in my sleep that it looked like I’d been mauled by a very cute kitten.) So we stayed 5 days instead of 3 or 4, and finally went home feeling mostly great …

Tomorrow, come back for Part 2 of Ginger’s birth story, where things take a wild turn (but end up ok … don’t worry!).  Thanks for sharing the story of Ms. Violet with us, Ginger!  See you tomorrow!

Ginger Vieira has lived with Type 1 diabetes and Celiac disease since 1999, and fibromyalgia since 2014. She is the author of Pregnancy with Type 1 Diabetes & Dealing with Diabetes Burnout & Emotional Eating with Diabetes & Your Diabetes Science Experiment. Ginger is a freelance writer and Editor Emeritus at DiabetesDaily, with a B.S. in Professional Writing and certifications in cognitive coaching, video blogging, record-setting competitive powerlifting, personal training, Ashtanga yoga, and motivational speaking.