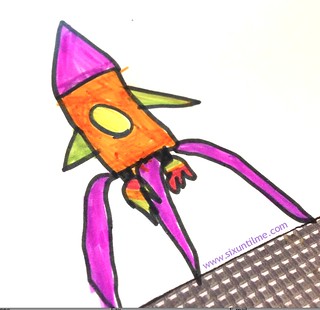 I have been in this womb structure for over 32 weeks, and all is well.  In weeks past, I’ve allowed the creature they call “Mother” to dictate many of our decisions, but boredom and a diminishing return on leg room is giving me the desire to kick things up a notch.

Ha!  Kick.  I know that’s a clever pun because of the research I’ve done on puns in utero.  The library is amazing in here (didn’t you know that the majority of a woman’s uterus is lined with book shelves?) and since my eyelids became useful in opening and shutting in the last few weeks, I’ve done my best to do as much reading before my launch at the end of the summer.

Back to kicking.  I’ve learned how to kick.  How to punch, too.  I know my mother knows I’m learning because she’s stopped communicating in words and more in exclamations starting with a startled “oof!” sound.  I’m assuming “oof!” means “This feels terrific and comfortable!”  Time will tell.

Last night, I figured out how to wake her up, using the power of my space capsule here.  The books call my actions “Braxton Hicks contractions” but I consider them more “special squeezes,” launching my mother into a panic at 2.35 am.  (She also woke up at 1.10 am and 4.40 am in order to evacuate her bladder – another fun game for me.  That thing is like a trampoline!  Or at least what I’ve read about trampolines.)  It’s a process of making her belly tight and oddly pointy for short intervals, in preparation for my birth.

Which is weird because she never had these contractions with my big sister.  Instead, my sister was pretty quiet for the duration, with smaller kicks and smaller movements throughout.  (And since my sister made what Mother refers to as a “sunroof escape,” labor pains weren’t ever experienced then.  I am scheduled to make the same sort of exit, but the date is slightly to-be-determined, depending on the stability of something called blood pressure.  So far, that number is not causing any problems for anyone.)  I have taken a decidedly different, more excitable route with my kicks and movements, making her stomach look like a pile of kittens are rolling around in here.  Which they are not – it’s just me.  But I’m bored.  And need to exercise.

I’m the size of a coconut, or a jicama, or a head of lettuce, depending on which strange pregnancy tracking application being consulted.  (My mother talks about how she prefers actual measurements over food comparisons, as they just give her heartburn.)  I weigh almost four pounds and when they measure me during the ultrasounds, I’m in the 55 – 61% percentile for size, which is where my sister tracked consistently, too.  Or so I’m told.  I’ve heard mention of an A1C as well, which seems to be the best my mom’s ever experienced.

Actually, or so I overhear.  My ears work great.  As do my two umbilical cords.  Only one seems connected solely to me.  Hmmmm.  Will have to examine that fully when I escape.

I have about a month and a half to go before I’m born, during which time I’ll continue to grow and expand and explore this small space I’ve been given before vaulting into the real world.  Judging by my mother’s musical preferences, it’s a world filled with something called Beastie Boys and a fellow who is sad a lot named Damien Rice and lots of singing that she thinks no one can hear because she’s in the car by herself but – HEY MOM – you aren’t by yourself.  I’m in here.  Listening.  And judging your attempts at the high notes.

But I know you love me.  I’m learning what that means.  It feels good.  I hear you say it all the time.  And that Dad person.  And I hear my sister telling me that, too, as she puts her face against your stomach in efforts to get closer to me.

I have yet to discover what the “Loopy” creature is, but I’m excited to find that out, too.  The world sounds like a curious place, and I’m looking forward to discovering what it looks like outside of this comfy den.

Diabetes Blog Week: I Can.