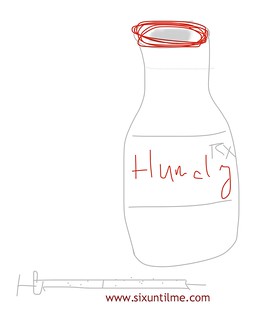 Now, at the halfway mark of my pregnancy, insulin resistance is becoming a bit of a thing, and is going to progress into an Actual Thing as the weeks go on, which happened last time and I’m prepared for but it still a bit whoa and this sentence is a run-on.

Which means that basal rates are creeping up ever-so-slightly (my pre-pregnancy basal total was around 13u and I’m now up to 16.2u) and my insulin:carb ratios starting to dance (pre-pregnacy was 1:10, am now 1:9 … except lunch is 1:12 because why would things be consistent?).  When I first found out I was pregnant, my endocrinologist told me that post-prandials contribute most to macrosomia, so keeping my post-meal blood sugars as in-range as possible would help mitigate that risk.  (But let’s take a look at the risk list … pre-existing diabetes?  Check.  Over 35?  Check.  Previous pregnancies?  Check.  Having a boy?  Check.  Cool.)

The plan?  Actively and aggressively pre-bolusing the shit out of my meals.

This sounds like an excellent plan, in a perfect world.  Pre-bolusing works well for me when the bolus is delivered at least 20 minutes before eating, the meal is properly carb-counted, and nothing delays the process of eating.  But one monkey wrench in that process can muck the whole mess up.

Pre-bolusing can feel spooky, like I’m tempting fate and inviting a low.  Not doing it is like opening the door for a high.  The middle ground could use some xanax.

Over the last few weeks, my pre-boluses have been executed with precision.  A few fistfuls of jellybeans have worked their way into rotation when I’ve bolused too early, but that’s to be expected.  The temp basal option on the t:slim is stupidly easy to employ, so sometimes I use a temp basal to help back me out of a mild low, but overall, I’ve seen my post-prandials come down nicely and hopefully my ultrasounds continue to show a very boring, predictable pregnancy progression.

Makes meals interesting, though.  They’ve become a game of roulette.

“Do you think we’ll get seated right away?”  Or, “I forgot to pre-heat the oven and now dinner is going to be 15 minutes later than I thought.”  Or, “Fuck.  I forgot to eat!”

I’m pre-bolusing all over the place.  Usually it works fine.  Sometimes I end up wicked low.  But every time, it’s in effort to keep my post-prandials from causing chaos in my kid.