ALL NEW Jerry the Bear Revealed.

My daughter loves Jerry the Bear.  And not because he’s this fancy teddy bear aimed at teaching children about type 1 diabetes.  She doesn’t care a whole lot about that.  She likes that Jerry is soft and cuddly and has a friendly face, and that he also needs her to give him food and check his blood sugar.

Birdy getting to know Jerry the Bear. #diabetes

“Like you do, Mom,” she says while she counts the carbs in the snack Jerry is about to have.  She’ll bolus him, feed him, and then drag him outside to her playset, where she and Jerry play in the clubhouse.

It’s not about diabetes, it’s about life.  But as she’s playing with this toy, she’s learning about diabetes in a way that speaks directly to her five year old sensibilities.  Jerry is a powerful teaching tool.

Today, there’s a new Jerry the Bear in town, the brainchild of Hannah Chung and Aaron Horowitz (two Rhode Island locals, making them even more awesome in my Rhody Pride mind).  Hannah and Aaron were kind enough to answer a few questions about Jerry and what’s coming next for the Sproutel team. 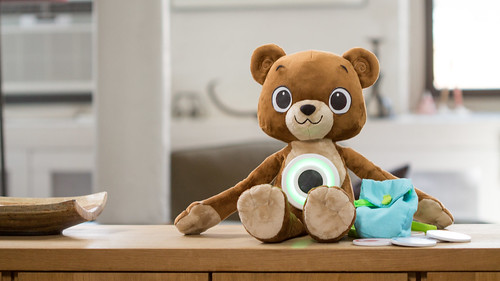 Kerri:  How long have you been working on the new Jerry, and what is new about this iteration of the amazing bear?

Team Sproutel:  We’ve been cooking up “new Jerry” in our labs for the past 9 months or so. This new version of Jerry is built from a curriculum centered on general health and wellness education for all kids. We now have expansion packs to customize Jerry’s eduction for kids with type 1 diabetes and food allergies.

Through our work with kiddos with type 1 diabetes and our research into other childhood conditions we began to realize that there are certain pillars of health education that apply to all children. We see this new bear as a platform to deliver high quality health education to all kids.

Kerri:  Why move from an embedded device to Jerry’s new “portal?”  And what are some of the different features of the portal?

Team Sproutel:  Jerry’s new portal is a window into Jerry’s world. As you wave the portal over Jerry’s body it show’s an x-ray view of what’s happening inside. Besides being cool, the new portal enables some neat features. First of all, it means that Jerry is now washable! This is something that parents really wanted because it wasn’t so easy to keep little Jerry clean with all of the playtime he was getting. It also enables us to grow Jerry’s world with new characters. Next year we plan on releasing additional plush characters from Jerry’s world, like his little sister Isabella, who will be brought to life with the same portal.

Kerri:  I see you’ve moved from diabetes into food allergies.  How are you able to have one bear to unite them all?

Team Sproutel:  With this new bear we’ve created a core set of play patterns that are fun for all kids. In order to keep Jerry happy, you have to feed him healthy foods, exercise with him, and keep him nice and clean with a good tooth brushing. This enables us to layer disease specific education on top of Jerry’s core functionality with expansion packs. For each condition we have an accessory (like an insulin pen or epi-pen), condition specific storybooks that teach hard skills, and new behaviors (like a blood glucose level!).

Kerri:  What’s next for our friend Jerry?

Team Sproutel:  Our aim is to continue adding more conditions onto the Jerry platform! We have a long list we’re currently thinking of for our next expansion pack and welcome any suggestions.

Kerri:  How can the diabetes community help move the mission of Jerry the Bear along?

Team Sproutel:  We have so much love for the diabetes community. For the past 3 years it’s felt like we’ve had a new family, one that has supported our growth and loved us unconditionally. We couldn’t be more grateful! It would be incredibly to have the support of the diabetes community to spread the word of what Jerry has done for kiddos with T1D and the hope for what he can do for all children.

Kerri:  And lastly, how can families order their own Jerry the Bear?

Team Sproutel:  We’re currently taking pre-orders on our website for the new Jerry the Bear at a special 30% off discount.

The press release from Sproutel this morning has some great information about Jerry, including Sproutel’s mission to continue to give back to the community.  From the release:  “Best suited for children ages 4 to 9, Jerry the Bear will be available to preorder at $99. Sproutel has pledged 1% of sales to help fight obesity and hunger through the Food Research and Action Center (FRAC). Expansion packs will support finding a cure for type 1 diabetes through the Juvenile Diabetes Research Foundation (JDRF), and food allergies through Food Allergy Research and Education (FARE).”

You can find out more about Jerry the Bear, and his team, through their website.  Or by following @JerryTheBearCo on Twitter.  Or by watching this video about the new and improved Jerry.  Huge thanks to Hannah and Aaron for continuing to remain true to the cause and the community, and for creating a profoundly effective teaching tool that you can hug.

Birdy the Kid and Jerry the Bear.

The NEW Jerry the Bear.

Gift Ideas for People with Diabetes.

Gift Ideas for People with Diabetes.