Several years ago, I “met” DCScribe (who remains mostly anonymous) on Twitter and he and I did not see eye-to-eye on much, aside from sharing the diagnosis of type 1 diabetes.  For a while, the lack of common ground frustrated me because I identify with and bond over experiences, but then I realized the alternative viewpoints he provided were not only important but essential to my growth as an advocate.  It is good for me to hear perspectives outside of my comfort zone; they help keep me realistic.  And when I had the chance to sit down and have lunch with DCScribe several months ago, it was really nice to confirm that two people who might butt heads constantly can still share a mutual respect … and a lunch table.

He was diagnosed with type 1 diabetes at 8 months and has lived with T1 for more than 50 years. Over the course of his career as a journalist, he has worked as a reporter in Washington for 26 years covering the White House and Congress as well as conflicts overseas, hurricanes including Andrew and Katrina, and every presidential election since 1988.  He’s recently embarked on a new career in global health that will take him to the frontlines in the battle against Ebola, malaria, AIDs and other scourges around the world.

And today, DCScribe is taking a turn here at Six Until Me to talk about diabetes technology as something that assists or insists.  Read on for more.

The older I get the more I’m struck by how the decisions I make in so many facets of life are deeply informed and influenced by my long career refereeing soccer at the highest levels.  It’s even shaped my relationship with diabetes technology. And yeah, I can hear the rumbli 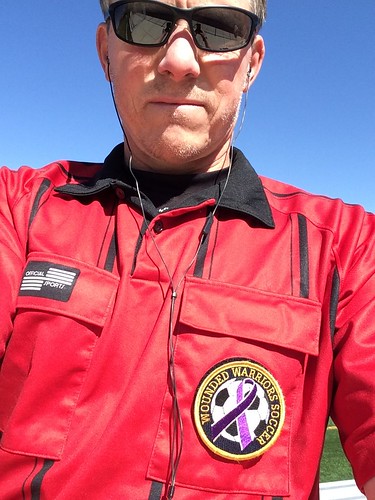 ng. “Holy hell. Where’s this going? That dude ought to check his ‘sugar.’”

It’s a question every diabetic should ask when making a decision about the technology you need (and don’t), how to use it and whether it means being in control or under control. Understanding where that line falls and enforcing it is central to my D management and my easy, stress-free life with the disease.

I speak only for myself, of course, and concede there might be gaps in my perspective. After all, only two other people outside my wife and kids and my doctor knows of my condition and my identity. My wife knows I use a pump but doesn’t know the brand or really how it works. I never share my BGs with anyone, though I’ll offer vague updates at home such as, “I’m gonna wait a bit to eat dinner.” It works for me; I’ve never had a single bad day from diabetes in more than 50 years. Sure, some days are better than others but not one has been truly bad or difficult.

There are lots of reasons, but an important one is my comfortable but always skeptical relationship with technology.

I have no idea if I’m different in that respect. But from scanning the Diabetes Online Community twitter feed and beyond, I wonder if enough people asking the question about technology’s proper place and power. (Here’s one place where it was asked and discussed publicly. It’s a cautionary tale and luckily I can’t ever imagine finding myself in a similar place.)

At the same time, I’m not immune from the pull of technology. I use a pump and have for 16 years (though my current pump is 7-years-old. Let’s face it: a pump is little more than a tricked-out syringe.) It’s why I got my first blood glucose meter in the 1970s and have used one ever since (though my one-and-only meter today is 9-years-old.) It’s why I’ve never used a continuous glucose monitor and never will. I’m constantly examining that distinction and that, along with my natural skepticism keeps me from chasing the latest, often imperfect, shiny object until its use and accuracy are proven.

This also fits with my belief that too much information can be more of a burden than a savior, especially if that information is imperfect. I wonder too if a fixation on technology diverts attention from proven and powerful “human factors.” For me, the basis of my success and easy life with D is rooted in discipline when it comes to food, making sure I’m physically fit and a refusal to ever use diabetes as an excuse for anything at any time.

Which brings me back to the beginning and “the pitch.”

In soccer, most games have three refs (though in a lot of my games there’s also a Fourth Official.) The Center Ref is the only one with a whistle. He or she prowls the entire field and is the one person responsible for fair play and safety; for keeping the official game clock and chaos to a manageable level. The Center Ref is the ultimate and singular authority. All decisions start and end with him or her.

The Center Ref uses his or her experience, training, knowledge and physical fitness to manage the game, navigate nuances and the many “gray areas” woven into the Laws of the Game and to ensure the rules are applied in a fair and consistent way.

But the Center isn’t alone. Along for the ride are two Assistant Referees, one on each sideline. Without ARs, the Center’s job is difficult if not impossible, especially on a regulation field that measures 120 yards by 80 yards.
The ref crew is a team in the truest sense, but to work well, everyone understands this: Good assistant referees never “insist.” Their job is to “assist.” That means there are times when the Center Ref will wave down a flag (or tell an AR through the headset) because the Center Ref is in a better position or has more experience or a different understanding of the larger picture.

Replace “AR” with “diabetes technology” and you get the idea.

That’s why I seldom follow the number my bolus “wizard” spits out. Its why, when my meter says I’m 70 mg/dL and I’m getting ready to ref a game that will require running upwards of seven miles and demand thousands of decisions, including a few that are game critical, I don’t hesitate. I appreciate my meter’s “assistance,” jam a granola bar in my mouth, wash down with a gulp of sports drink and go. But not always. Sometimes I simply walk on the field and start the game.

I seek assistance in carefully chosen places. That makes perfect sense to me. It doesn’t mean I’m anti-technology.

I’m a guy, so I’m hard-wired to get all tingly from even most dubious technological “innovation.” It should be no surprise that I would have instantly given up insulin before surrendering my satellite phone or the solar charger for my up-armored laptop when I was reporting overseas. In the early 1980s I had a very public and very serious relationship with my 30-pound Teleram “portable” computer that I happily lugged from one corner of the country to the next so I could transmit stories to the Mothership at the wondrous rate of 1,200 baud per minute.

And yet, I still use a 5-year-old iPhone and have zero urge to change because … it works.

Technology is great. I love it. I use it – a lot of it. But skepticism is more useful for me, as is enough patience to make sure the latest, greatest bit of technology works as advertised, and that whatever tech I use in my ride with diabetes knows its place, no matter how hyped or magical or shiny.

Thanks for your perspectives, DCScribe.  And for the link to the oldest computer ever.

Diabetes Research: My Evolution Toward a Patient Revolution.