“Can I lay here?”  I pointed to the almost-available section of the couch, where if Chris moved his legs juuuuust a little bit and Siah got her fat furry butt off the cushion, I could curl up and let my brain go quiet after a full day of writing.

“Sure thing,” and Chris adjusted his body.

“No,” was the message Siah sent me with her cat telepathic powers, but I snuggled in anyway.

And in one, seamless movement, the couch cushion leapt up and grabbed the infusion set from my arm with its teeth and ripped it off.  The couch’s fangs were gigantic and its talons just as daunting, determined to keep any diabetes device from properly resting against my skin.  I was livid – this infusion set was only a day old! – but I knew I was no match for the couch.  It was huge, and it had an agenda of rage.

I eased away from the cushion slowly, trying to keep from agitating the angry beast.  The couch snarled and tensed, poised to make a play for my Dexcom sensor if I dared to get comfortable against its fabric again. 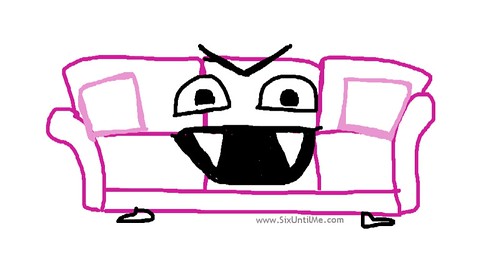 The couch quieted and settled back against the floor.  And I went upstairs into the bathroom to put a new infusion set on.  And when I came downstairs, I sat on the floor, the steady breath of the wicked couch prickling the hairs on the back on my neck.