OMG Nick Jonas … with a Sizeable Shout-Out to Dexcom.

I can’t hear the name “Nick Jonas” without immediately hearing the then-teenaged cousins in my family clutching their invisible pearls and screaming, “OMGNICKJONAS” as if it was one word. In my mind, I think of Nick Jonas as a kind and smart … not because I have any personal experience to base that assumption off of, but because he’s also living with type 1 diabetes and I tend to be somewhat (read: entirely) biased towards people hosting broken pancreases.

Nick was diagnosed with type 1 diabetes about ten years ago and has recently joined Dexcom as a Dexcom Warrior.  He’s been talking with members of the media about his new partnership and how CGM has changed the way he manages his diabetes, and somehow I managed to sneak in as a member of media.  I missed the scheduled call with OMGNICKJONAS but his team was kind enough to carve out some time one-on-one while Nick was traveling.  (And, for the record, this whole phone call took place with my daughter skipping by my office door, a giant inflatable stegosaurus being kicked around like a soccer ball.  Such media.) 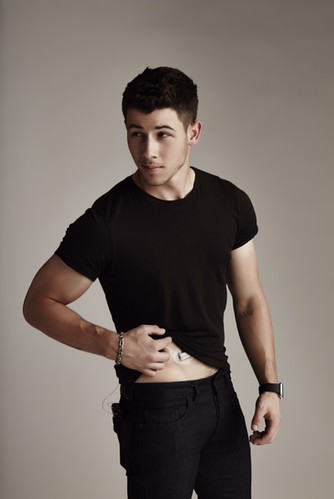 Kerri:  You’ve been part of the diabetes community for ten years now, and have been an advocate for this disease almost since your diagnosis, right? Can you talk a little bit about what made you want to go public with your diabetes, and how that’s influenced how you feel about it?

Nick Jonas:  I went public with my diabetes story six months after my diagnosis. The thing for me was about being as open and transparent as I could be to find support.  I didn’t know any other diabetics.  By sharing my story, I wanted to seek out and encourage people that this can be okay.

Kerri:  So upon diagnosis you weren’t immediately greeted with stories about people’s Great Aunt Ethel who was mostly dead?

Nick Jonas:  (Laughs.)  No.  Soon after diagnosis, I actually befriended a nurse whose son was a diabetic. For my mom and I both it was nice to have someone to talk with who had a better understanding of diabetes. People try not to overwhelm you with all of the information, but this friendship helped.  I was encouraged.

Kerri:  I’ve been wearing a Dexcom CGM system since 2006 and the data is incredible to see. How about you – has CGM technology influenced the way you manage your diabetes?

Nick Jonas:  It’s one of those things that, for me, I feel like I have a best friend looking out for me. Which is the best thing. I manage my diabetes kind of by myself.  I’m kind of personal about it.  I like to have control over it, and I’m independent. With my CGM, I know what’s coming, and that makes thing so much more simple.

Kerri:  Do you know the high and low alarms from the receiver by heart?

Nick Jonas:  I do. (Laughs.) I’ve been totally in range for the last few days, though, so I haven’t heard the alarms in a while. One of the directors on KINGDOM, Michael Morris, is also on the Dexcom and we are always comparing our numbers.

Kerri:  When I travel for work, I make use of the Share application for Dexcom so that my family can keep an eyeball on me. What are your thoughts on being able to SHARE data, and do you SHARE?

Nick Jonas:  It depends on the situation. I don’t like my mom to be stressed about my diabetes so I don’t share with her, but my brother has looked in. We were recently in Las Vegas and when we woke up the next day, he knocked on my door and said that he received an alarm, and that I had been a little bit low.

Kerri:  That’s like the ultimate “big brother” moment.  So for those moments when you do SHARE, are there ground rules for the people who can see your data?  Like “Don’t ever call me when I’m high, but call when I’m low” sort of thing?

Kerri:  You’ve mentioned the perspective gained from life with type 1 diabetes. How has that perspective shaped you as an artist?

Nick Jonas:  It comes down to responsibility. At an early age, I had to learn to live with a disease and how it affects how I live my life.  I don’t want the things I’m able to do or not do be dictated by diabetes.  It’s not perfect; days can be unpredictable. But at 22, almost 23 years old, I’m aware of what kind of a person I want to be as a result of diabetes.

There’s always a way to see something in a positive light. You’ll live a miserable life if everything that’s challenging is a disappointment.

Kerri:  I’m glad you brought up the idea of perfection, because whether you want to be or not, you’re in the “role model” position in the diabetes community. How do you feel about having people looking to you for inspiration, diabetes-wise, and how do you stay inspired yourself?

Nick Jonas:  I think it’s a two-way street. In moments when I’ve had tough days and needed a pickup, someone mentions that their child or friend has diabetes and that my story helped them.  Hearing that keeps me doing what I’m doing.

Kerri:  And you feel like you can be honest about the good and bad days with diabetes?

Nick Jonas:  Yes, definitely. In the past, I’ve been hyper-insecure about admitting that I had really tough days because I want to stay positive. But without a doubt, anyone that lives with diabetes has tough days.

Kerri:  I appreciate all of your honesty about diabetes.  But diabetes can’t be the only thing we talk about.  People want to know the life that diabetes is a part of, right?  Like what bands are on your playlists these days?

Nick Jonas:  Right now?  I just made a playlist on Spotify, actually.  I’m listening to a band called Purity Ring, this song by Melanie Martinez called Pity Party, and this song by Haim.

Kerri:  Did you know that one of the girls in Haim has type 1?

Nick Jonas:  Yeah, actually.  My brother met those girls at Coachella and told me that one of them was diabetic.  That was pretty cool.

Kerri:  Did that make you like their band more?

Nick Jonas:  I definitely liked them already, but finding that out didn’t hurt.

Thanks to Nick for candidly talking shop, and to Dexcom for supplying media photos that make me feel slightly uncomfortable for posting, but I’m going to do it in the name of science.  For more information on Dexcom, you can visit their website.  And for my personal Dexcom disclosures, you can read my disclosure page.