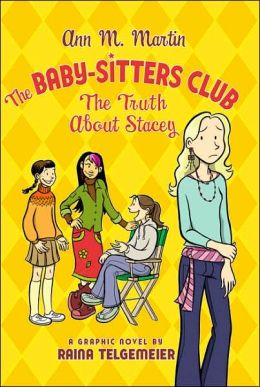 Stacey McGill had diabetes and – holy islets – she was cool.

She was one of the lead characters in Ann M. Martin’s The Baby-Sitters Club series, acting as treasurer of the club.  You can go deep in this wiki, where Stacey is described as having “a very sophisticated style, which comes from having lived in New York. She loves wearing flashy clothes and jewelry and doing different things with her hair, which she keeps looking fabulous.”  FABULOUS!  Some of Stacey’s likes are cited:  “babysitting, math, money, shopping, pigs, Mary Poppins, and fashion” as well as some of her dislikes:  “having diabetes, hospitals, people throwing up, other people seeing her give herself insulin injections, and barf buckets.”  (I will admit to reading the whole wiki and loving the hell out of it.)

I can’t disagree with those dislikes, because I also am not a fan of barf buckets.  Or diabetes.

While Claudia was my favorite BSC member to read descriptions of (read What Claudia Wore for why), Stacey was my favorite overall because of the shared diabetes connection.  According to BSC lore, Stacey was diagnosed with type 1 diabetes before she started seventh grade and her diagnosis was chaotic because it pulled her out of school and caused some riffs between Stacey and her friend Laine Cummings.  (Yes, I am switching over to my most Punky Brewster of outfits right now, as I type this, transporting myself back to 1986.)

tl;dr – Stacey was awesome because, at the time, my friends were reading The Baby-Sitters Club and it made my diabetes seem mainstream and almost cool.

Which is exactly why I jumped at the chance to review the graphic novel version of The Truth About Stacey for Graphic Medicine (thanks, MK Czerwiec, for this opportunity!)

The original book is described by the Scholastic website as: “Poor Stacey. She’s moved to a new town. She’s still coming to terms with her diabetes. She’s facing baby-sitting problems left and right. And her parents are no help. Luckily, Stacey has three new, true friends — Kristy, Claudia, and Mary Anne. Together they’re the BSC — and they will deal with whatever’s thrown their way . . . even if it’s a rival baby-sitting club!”

I remember reading the text book cover-to-cover and feeling that kindred spirit thing, and I wondered if a graphic novel would have the same appeal decades later.

The focus of the book is NOT on Stacey’s diabetes but MWD (moments with diabetes) are sprinkled throughout.  There is something so comforting, so normalizing, about seeing a character living with diabetes not as the focus of their life, but as part of what their character goes through.  The crux of the story in this book is about a rival babysitting club, but diabetes moments are woven in to illustrate (pun intended) how diabetes isn’t something you can assign to a character and then forget about.  You have to commit.  Diabetes is as ever-present as the ink on the page, and it’s refreshing to have a visual aid for an oftentimes invisible disease. 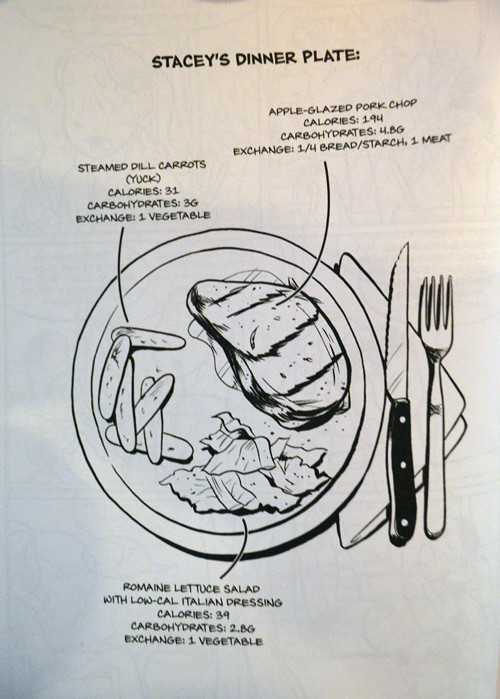 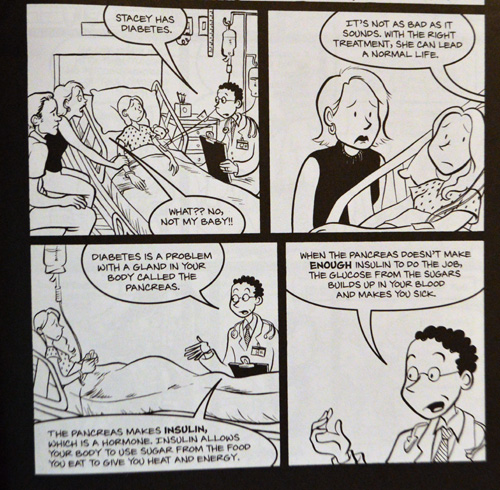 I’m sure it happens all the time, that you and your friends are reading the same book for the same reason (because it’s a good story/popular/on sale from Weekly Reader or the airport).  But how often do you, as a person with diabetes, get to have a sneaky, secret, awesome reason to enjoy a book?

The truth about Stacey is that even though she’s a fictional voice, the diabetes is real, and it gives a little, “Hey, me too!” moment for kids and adults alike.