During my visit to Clara Barton Camp yesterday, I heard the same sentiment over and over again from the kids wearing the bionic pancreas:  “It works.”

“It was weird not to touch the buttons when it beeped,” Addy said, an 11 year old camper at Clara Barton Camp who has been living with type 1 diabetes since she was two.  “I’d reach down to look at it or touch it when it beeped but then I’d have to remember not to touch anything.”

“A big change from needing to check every beep and look at the devices all the time, right?  So when did you feel like you were used to wearing it?”  I asked her.

“Yesterday.  Yesterday, it beeped and I didn’t reach down.  I just said, ‘Whatever.'” 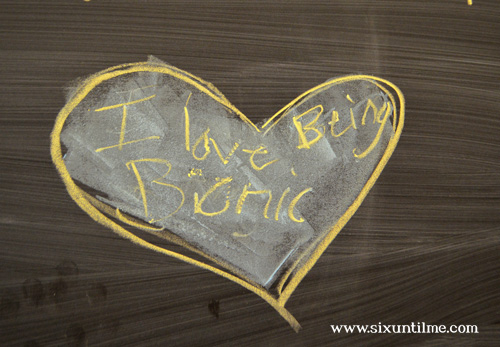 Addy has been wearing the bionic pancreas since Sunday, part of  the Bionic Pancreas study taking place at The Barton Center (and also the Joslin Camp) this summer.  She’s one of thirteen campers at Barton taking part in the study, ages ranging from six to 11 years old, six girls suited up with the bionic pancreas last week and seven this week.  “My blood sugars have been perfect – I haven’t been low at all and I haven’t been high, except for one 203 mg/dL.”

If a week without blood sugar excursions sounds like an impossible dream, take heart.  Take pancreas, too, because this technology actually exists and is currently attached to seven girls in Massachusetts.  And not “seven girls stuck in a hospital bed under strict activity guidelines,” but seven girls who are running amuck at camp, swimming, dancing, singing in the dining hall, and burping at picnic tables outside of the cabins.  The bionic pancreas has been highlighted in the New York Times, NPR, chronicled extensively over at diaTribe, and has also been the subject of a frequently-downloaded-and-rabidly-shared New England Journal of Medicine article.

The system has a few moving parts:  two t:slim insulin pumps with the Bluetooth switched on for communicating with the phone (one filled with insulin and one filled with glucagon), a Dexcom CGM, and an iPhone.  An in-depth look at how the technology works together can be found in the NEJM paper, but the basic gist is that the Dexcom monitors blood sugars and sends that data to the iPhone, which is running an algorithm that doses insulin, glucagon, or refrains from dosing anything at all.  Lows can be corrected by glucagon, highs by insulin.  Meals aren’t carb counted, but instead the algorithm “learns” what a big meal, small meal, or snack is based on minimal input from the PWD.

“It’s beautiful,” I said to Ed Damiano, one of the principal investigators on the project, after seeing some of the blood sugar outcomes from previous studies.

“It’s still a little clunky,” he replied.  “I want to see one device, one infusion set.  But this?  It works.”

Currently, the camp study at Barton has girls on the full bionic pancreas system for five days, and then five days on their own insulin pump, but with the CGM blinded to the user and still uploading to the cloud.  Bionic pancreas campers are required to check their blood sugar at least seven times per day.  Due to camp safety protocols, the study team can’t let low blood sugars “ride” and assume that the bionic pancreas will step in with glucagon in time, so success on some levels isn’t judged by minimal time below 70 mg/dL but instead the reliable metric becomes how many times did the study team need to intervene for a low blood sugar.

This summer, there are a few new features on the bionic pancreas.  One is “microburst glucagon,” which is most useful for when people are disconnecting the system for swimming or similar, in efforts to provide a safety net for low blood sugars while doing that kind of activity.  There is also an option for temporary targets, which allows people to adjust their target thresholds.  “Normally, we aim for 100 mg/dL, but if we can adjust the threshold and show a change in the A1C based on that adjustment, we’re able to titrate A1C levels using the bionic pancreas,” said Ed.

Some challenges still exist with the system.  The bulky devices, for one, are their own challenge, but as the project moves forward, the diabetes community rallies to support current needs.  “Donna from Tallygear came up and made these ‘GO BIONIC!” belts in a matter of 48 hours.” Ed said, smiling.  “We didn’t ask her to do that.  She offered, and we are so grateful because the kids love them.”

The kids sing the praises of this device.  Ally, diagnosed in 2009 at the age of five, wore the bionic pancreas the week before Addy suited up. “It really works. When I saw the video online, I thought it was made up. I thought the girl in the video was lucky, and that her numbers were just perfect that day. And then I wore it [the bionic pancreas] and I was like, ‘Wait … it really does work!'” 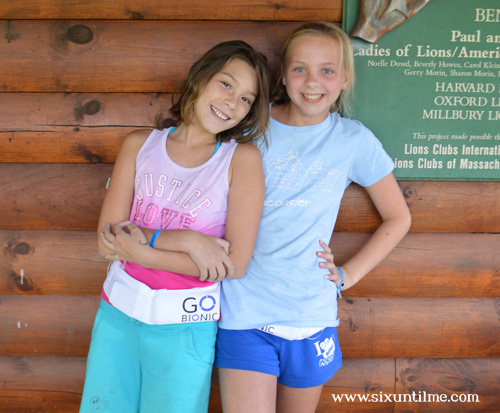 Addy chimed in, her bionic pancreas belt visible over her shirt:  “Ally wore this last week and now I’m wearing it.  She said to me, ‘If you don’t want to wear it, can I wear it for you?'”

“Does the weight of the device bug you?”  I asked Ally.

“No.  It’s a little heavier but I don’t care.  Even with all the pumps on and the phone, I could still do a back-handspring in the grass.”

The study at Barton concludes this week and then moves over to the nearby boys’ camp.  But after this study finishes, there is still work to be done.  The amazing bionic pancreas team has come so far and the 2016 pivotal study is in sight, but needs community support to get there.

This is where the Bionic Challenge comes in. 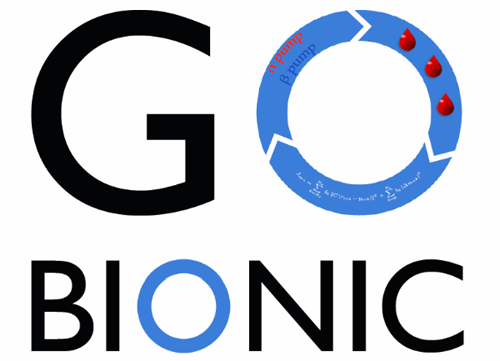 According to the website call-to-action:  “The Bionic Challenge asks each family to raise $5,000 in 60 days (by September 1, 2014). If each family in attendance here today can turn to their friends and relatives and obtain 50 $100 donations (that means finding only about one donation per day for the next seven weeks), we can resume our development effort in September and keep on schedule for our final pivotal study in 2016. If we cannot resume in September, it could jeopardize our ability to secure a recently announced time-limited $20MM NIH funding opportunity, which is due in about nine months (April 15, 2015) and could support all of the clinical costs of our pivotal study.”

tl;dr:  the project needs the support of the diabetes community because, without it, the goal of a 2016 pivotal study may be delayed. If you can donate, please do. If you can’t, please consider sharing this information with someone who can. The more people who know how to help, the better.

After being promised a “cure in five years” back in 1986, the idea of the bionic pancreas being delayed because of money makes me feel insane. I could understand a delay if the technology wasn’t up to snuff, but to delay due to funding is unreasonable.  I saw kids playing outside yesterday afternoon, running around and laughing and having fun and the burden of diabetes seemed only as heavy as the belt around their waist, which with time and technology becomes smaller and lighter.

“I look at diabetes as management and maintenance,” said Ed, as we sat in the Barton Center bionic pancreas command center, where the study team was hard at work monitoring the campers blood sugars from the cloud.  “The maintenance part is the changing of an infusion set, the changing of a sensor, the checking of blood sugars.  The management part, to me, is the emotional part of diabetes.  The fact that you are so often told that you’re ‘wrong’ because you’re trying to thread the needle.  This device doesn’t take away from the maintenance part because it still requires that you wear something, do something, change something.  But it does make the management part smaller.  So much smaller.” 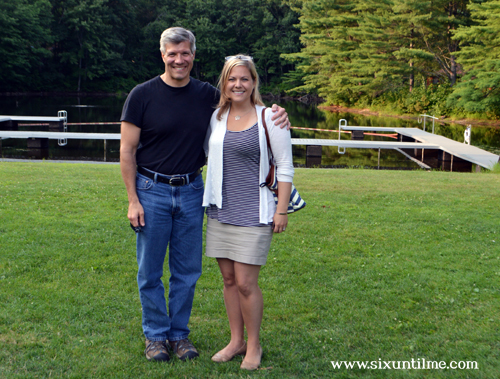 I don’t know if a biological cure will be seen in my lifetime.  I was diagnosed with type 1 diabetes in 1986 and have been living well, but not without frustration, as a host to this disease for almost 28 years.  My perception of what a “cure” is has changed as I’ve grown older, and my hope for something that takes this disease away fades with time.  But seeing the bionic pancreas at work, around the waists of children not much older than my own, and watching the worries of diabetes lifted from their minds and the minds of their families, I feel renewed hope.  More hope than I’ve felt in a long, long time because this is real.  I held it in my hand.  It filled me back up.

The Curse of the Camp Coleslaw

Warning: The One About UTIs.