The ’84 Volvo was my brother Darrell’s, so it doesn’t really count as my first car. It was The First Car. I stole it out from under my brother when we went to college, but upon his return every vacation, I had to give up the keys.

I remember the first time I was behind the wheel by myself. It was the day I got my license, March 17th, 1995, and I was roaming through the house searching for excuses to take the car.

“Mom, looks like you’re out of hairspray,” I coughed, walking away from the cloud of Vidal Sasson I had just “accidentally” created in the bathroom. “I should go get some.”

“Hey Dad, don’t you wish we had some brie cheese and fancy crackers to eat? I sure do.”

“Darrell, don’t you want to go for a drive down to Watch Hill and see if the carousel horses are up? I know it’s only March, but maybe they put them up two months early this year.”

“Courtney? Are you feeling okay? You look like you have a fever. Maybe you should be driven to the doctor’s office, just in case you’re sick.”

No bites. Not even a nibble. Until …

“Eddie, it looks like we’re out of milk.” And no sooner were the words out of my mother’s mouth that I grabbed the keys to the car and stood in the middle of the kitchen like a Superhero – “Don’t worry, guys! I’ll go get the milk!”

The ’84 Volvo and I had our moments of excessive speed on the highway towards the mall, the doors rattling and the tires wailing “Bad idea! Terrible idea!” With no working horn, I pulled into my friends’ driveways, rolled down the window (which oftentimes remained permanently rolled down) and yelled “Beep!” I learned that the gas gauge didn’t always tell the truth, the catalytic converter forced me to drive in the summer with the heat on, and the radio only picked up classic rock via the coathanger I had rigged to the trunk.

So when my parents decided to lease me the ’96 Jetta GL in shiny lavender my senior year of high school, I was well beyond ecstatic. A brand new car? For me? Don’t mind if I do.

The ’96 and I had a bond that usually only forms between a mother and her child.

Aside the aforementioned blatant exaggeration, I really was completely obsessed with that car. I cleaned it with a toothbrush. I kept the interior spotless and smelling like Cucumber Melon body spray from Bath & Body Works. When bits broke, I fixed them myself. I changed headlight bulbs and fixtures. I rolled underneath the car and replaced the front valance. I changed tires. I changed oil. I was able to replace the battery and rearm the alarm. When it came to Do It Yourself, I did it myself. And I appreciated the fact that my spoiled brat 17 year old self had a brand new car at her disposal. I took exquisite care of that car to the point where it looked almost perfect even 9 years later. 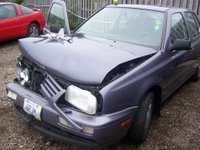 Until I totaled it.

Faced with the destruction of my beloved lavender car, I had to channel my grief (I realize this is very dramatic) and find a new car. I felt confident that strong VW engineering played a part in my escaping the accident essentially unscathed, so I looked into a newer Jetta. And what I found was a 2002 Jetta GLS.

I wasn’t completely sold on this car, but necessity fueled its purchase so I took out my first car loan and did my best to get comfortable behind the wheel of my new Jetta.

Three days after buying the car, I was on the highway and a rock hit my windshield, leaving a huge ding. Shaken but not defeated, I had the windshield repaired. On a trip to New Hampshire with Chris over the summer, the oil light came on and the dipstick revealed a drained engine, 1,000 miles before the car was due for an oil change. One night in October, the radio wouldn’t turn on because the fuse for the radio unit blew out. I tossed a tire just a few weeks ago, during a snow storm on my morning commute to work. Just after Christmas, on the way to the gym one night, the engine started to buck and the car stalled out. Engine codes were thrown. The oil burned off again, leaving the car dry. And last night, the engine stalled again. Low on oil.

I continue to make these monthly car payments.

My car was towed from my home.

Kerri is in third person and Pissed Off.

Right now, I am at work, waiting for my car to be returned to me. Supposedly the engine was gaffed up by a faulty ignition coil. And supposedly the oil level is fine. I’ve been told the car was detailed and filled with gas as an apology for my trouble. I’ve been told “it’s going to be okay,” and “we value you as a customer.”

Mark my words: This will be the last Volkswagen I purchase. This car has been trouble from the outset, borne out of the demise of my precious ’96. It’s possessed by wild demons, I’m certain of it. This is the last Jetta for me.

… until I buy a new one.
Update: They just dropped my car off to me at work. Bright, clean, newly waxed, filled with gas, started as soon as the keys kissed the ignition.
However, my front plate remained at the dealership, where it was attached to the front bumper of the loaner car I was offered. Am now waiting for the kid to return with my front plate.
I’m waiting patiently.
With an uzi.

A Bad Year for Goodyear.

Gomez at the Bowery

Buried to Premiere at Sundance