No Diabetes By Kerri December 26, 2005 No Comments

Julia has tagged me. And while I’m pretty sure I was on Goo, Goo-oool, Goal, or whatever you called your Safety Zone when you played tag as a kid, I’m here to offer up Five Random Facts About Six Until Me. 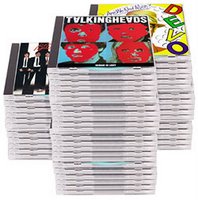 accordance with their chronology. My mind sort of explodes a little bit every time I notice that a piece is out of its home. (Mind you, I have over 800 cds and I date a filmmaker. I’m a Media Maven.) I don’t think this habit is healthy but I can’t stop. I’ve tried.

Random Fact Two: I think I sound fantastic singing. I can hit any note. My vocal range has been likened to Bono, Damien Rice, and Jewel. In my car, with no one else in there and the windows completely rolled up and if I sort of know the words, I am the world’s best singer. Ever. No, I don’t sing in public. And no, this assertion as World’s Best Singer has never been confirmed by another living soul. But it’s never been denied, either.

Random Fact Three: In keeping with my stellar reputation as a songbird, I must admit to never knowing the words. I’ve mangled the chorus of “Panama” by Van Halen, thinking they were singing “Cannonball.” In the Whitesnake ballad “Here I Go Again,” it was “Like a twister I was born to walk alone” (instead of a drifter, but to me it still makes sense). And in that favorite Christmas diddy, Sleighride, those famous lines “Giddy-up, Giddy-up, Giddy-up, let’s go Let’s look at the show…” have been reduced to “Giddy-up, Giddy-up, Giddy-up and go, dit dit dit di, SNOW!” I make up the words when I don’t know them. And, I must admit, I’m never really horrified to find out I’m wrong. Just embarrassed that I’ve been singing them wrong my whole life.

Random Fact Four: I can’t swim. Not a single bit. I can float and I like to frolic about in the waves, but if I were told to swim in some crazy triatholon, I would drown. Easily. Or I’d have to whistle for dolphins in hopes that they’d come save me and let me hang onto their fins until I reached the shore. But without those dolphins, I’m in trouble.

Random Fact Five: I have never seen “It’s A Wonderful Life.” Everyone tells me it’s the greatest Christmas movie ever. And that Jim Stewart’s performance is epic. How have I survived all these years without seeing that movie? Kerri, you have to watch that movie. It’s the best. So poignant! But you know what? I just don’t care.

Now it’s my turn to tag people, I think. If I’ve pegged you to provide your Five Random Facts, don’t feel compelled to comply. Just know that I’ll be at my desk at the insurance office, crying big tears, waiting for your blog to update.

Random Musings Before the Seafood Festival

The Other Two Behave Themselves.