The construction site worker. He held out the stop sign so abruptly that the driver of the BMW was forced to slam on his brakes. Two car lengths behind, I hit the brakes as fast as I could but I knew.

We saw it coming. “I can’t stop.” The sentence fell from my mouth and settled in my hands as I braced them against the steering wheel. “We’re going to hit him.” His arm grabbed me.

The combination of the cold summer rain and the layer of sand on the road from the construction site made a surface my wheels wouldn’t catch. The brakes locked up. The car slid towards the BMW for the longest five seconds I’ve ever known. My hands froze against the wheel and my 1996 Jetta, holding hostage myself and The Boy, smashed against the back of the BMW with a force I thought only existed in nightmares.

The noise was incredible. Thirty miles an hour never seems fast as the scenery flies by, but it is so very quick when everything else stands still. The airbags leapt out at us, tossing a combination of 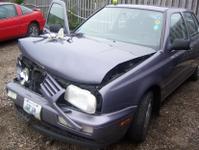 burning and chalk at our exposed arms and faces. I closed my eyes.

Those three words were all I knew until he looked at me and said “Yes.”

What happened next was standard accident fare: The Boy and I stood beside my crippled car, waiting for the police to show up. I sat in the backseat of my car, whose front end was spilled across the street, dialing The List: Mom, Dad, Work. “It’s Kerri. I’m okay. [The Boy] is okay. I totaled my car.” My boss received the additional caveat – “And I’m not coming into work today.” The Boy was my hero. He talked to the other driver, the police officer, and held my face in his hands when I started to cry.

Fast forward – the other driver is okay. The Boy and I are okay, save for airbag burns, sore backs, and bruised arms from where we held each other at impact. Emergency room visits yield no broken bones. My car, the 1996 VW Jetta in that pretty lavender color, sits in what most would call the Repair Garage, but I know it’s the salvage yard. The Boy and I are fine, but the car is totaled.

I’ve had this car since high school. I had it when I graduated. I had it before I went to college. I had it before Mom and Dad divorced. I had it before any cotton wool spot. When my home was tossed into upheaval due to divorce and familial strife, I would sit in my car, turn up the radio, and go for a drive. That car made me feel safe. I owned it. I was very proud of it. It was mine. And it gave me a sense of security when life became a kaleidoscope of chaos.

So it hurts to let it go.

But it is just a car.

I’ll say, with certainty, that there is nothing more important than the fact that no one was hurt. We all walked away from an accident that could have hurt us very badly. Any lament for the lost VW pales in comparison to what could have happened. I realized in a split second how powerful a car can be. How fragile a life can be.

And how powerful a love for someone can become in that instant.

A Bad Year for Goodyear.